A VOID IN RETROSPECT

Produced with generous support from the Kamel Lazaar Foundation.

A Void is a Void in retrospect.

It is only once the new has emerged, that the site of its emergence can be considered to have formerly been a Void.

Such is the hidden constitutional ability of space: to expand in order to allow for this new growth.

”A lot has been turning in my head about the Void since the day I visited your studio, but none of it evolved into an actual, concrete thought”, wrote art writer Özge Yılmaz, in an e-mail three months after a studio visit where I told her about the pseudo-archaeological excavation I was studiously failing to begin. ”But,” she continued, ”I would still like to share an image that appeared to me while we were talking: as the Void grows and grows and grows, the total space of things that it excludes gets increasingly crammed. Lately, for whatever reason, I have been thinking about this quite often„.

I was four months pregnant at the time and thought that the description well befitted my growing uterus.
——————

2015 was the centennial anniversary of the Armenian genocide. Living in Turkey and pondering the effect of its missing people on the land itself, I had decided to deal with a Void and work to generate a number of interactions around this idea. I, an artist who often dealt with objects and sculpture had accidentally stumbled upon a Void.

These interactions took place in three different ways. Casually, I told people that I was excavating a Void when asked what I was working on:
‘’It was brought to my attention by an archeologist friend. When she first encountered the site it was already attacked, apparently by some treasure hunters, whose illegal excavation activity is what now allows us to come into contact with the Void. We are quite unsure about what this thing really is, but from what we can make of it so far, it looks like an extraordinary (if a little uncanny) occurrence.’’

The Void was underground -for sure- and we were in the process of preparing the necessary permits for its archaeological excavation. Since however, it kept changing place, we were repeatedly failing.

It was an invitation to connect to the idea, to search in others for resonances that this concept generated. The responses were so interesting that I was compelled to capture them. For this, I considered the video format, and made appointments to ask some experts if and where in their professional work they encountered any Voids. Since my field study was failing so surely, I had speculated that its location was not necessarily physical, and that it could just as well be within an academic field. (A notable response that came from Dr. Meltem Ahıska, from the Department of Sociology at Boğaziçi University).

A third way of generating interactions was through resurrecting and using a protocol of the Order of the Third Bird that directly addressed the question of regarding missing objects. For this, I teamed up with some prominent members of the ESTAR(SER) collective and organized three workshops (Niblach I: The Stolen Condition, Istanbul, 12-15 April 2014; Niblach II: Representing Absence, New York City, 28 May 2014 and Niblach III: The Unrepresented, 22-31 August 2014, Istanbul). The outcome of this effort is to be presented at SALT in Istanbul at the end of January 2016, in the form of a performative lecture and an experiential workshop.

Perhaps because capturing is antithetical to the idea of a Void, these interactions never settled in the form of a video work. Every time I was able to take out the camera or the sound recorder, I felt that the spirit had already escaped. The eye of the camera failed to do justice to the experience of nothing. Rather, these interactions were situations that left the Void resonating somewhere in the interpersonal space. There were vacuums, black holes, sunken islands and colossal goldmines; there were sinkholes that swallowed entire skyscrapers. There was the realm of the unrepresented and there was the empty seat of power; there was femininity, the idea of lack and the maternal space of artistic creativity; there was the question of memory and the space left behind by a missing beloved. There were many creation myths and there was the existential Void. There was the historical point of the revolutionary discovery of mathematical zero, and there were many other artists who had dealt with the question of a void. There was form, abstraction and pure negativity. There was the Void as a political potential and there was dark energy. And there was silence and respect for the un-representable.

‘’But you are going to destroy the Void!’’ My gallerist exclaimed, when I presented a proposal for its excavation. ‘’It’s boundaries are what define and confine the Void. If you excavate and take it out of the ground, it will no longer be!’’ She suggested that I proceed instead with remote sensing techniques such as GPR (ground penetrating radar).

Eventually, the GPR images morphed into ultrasound images. As a maker by profession, I became obsessed with these. It surprised me to see that my body had the technology to build an entirely new person. As the Void was thus transformed from a site of lack to a site of potentiality, I noticed at one point that I had to have incorporated it.

The projected excavation of the Void had originated and proceeded as a discursive work, but eventually, all words retreated from the piece. Coincidentally, it was the day before my daughter’s birth that I installed a Void in Retrospect (in ‘re-present exhibist: 2 years’, curated by Anna Zizlsperger, Mixer Gallery, 1 September – 11 October 2015). Abstracted from the entire process, the work seeks to invoke a site of emergence, by means of integrating water and powdered pigment.

A Void in Retrospect on the Kamel Lazaar Foundation Fellowships website 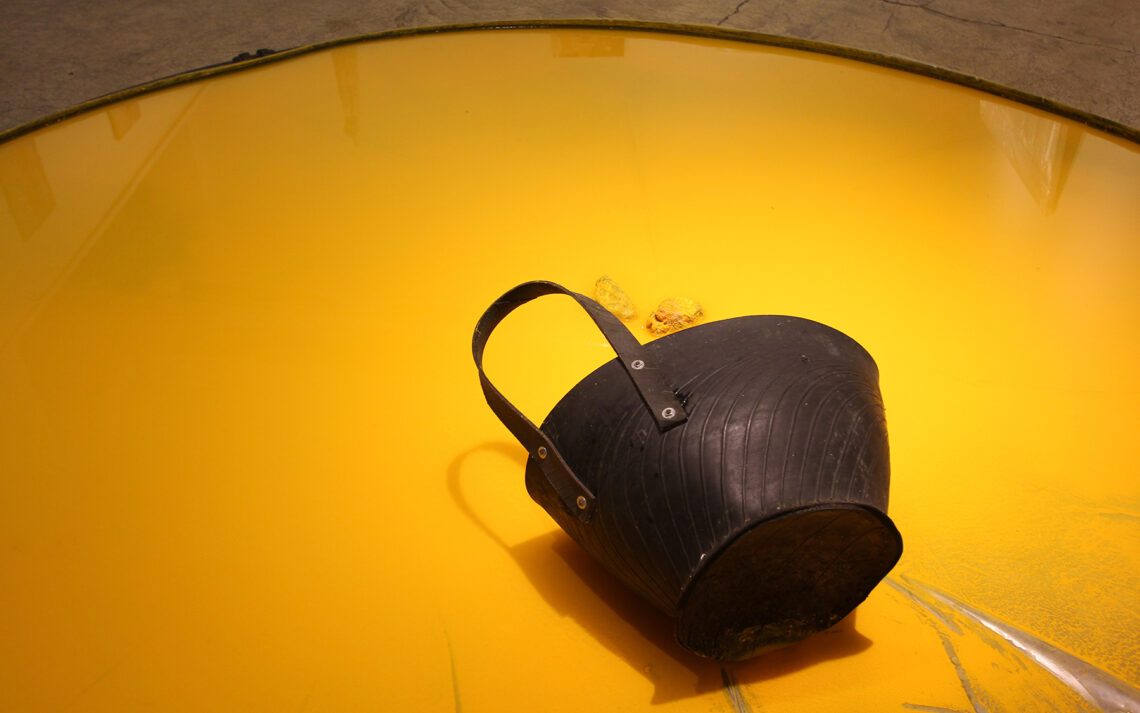 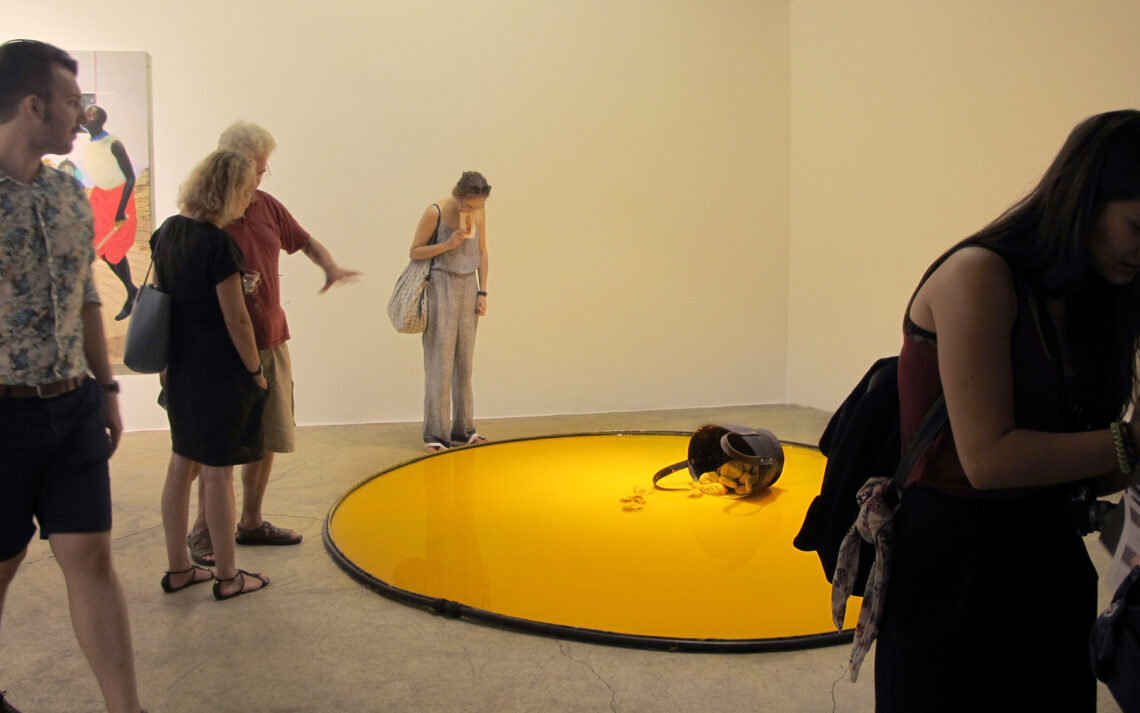 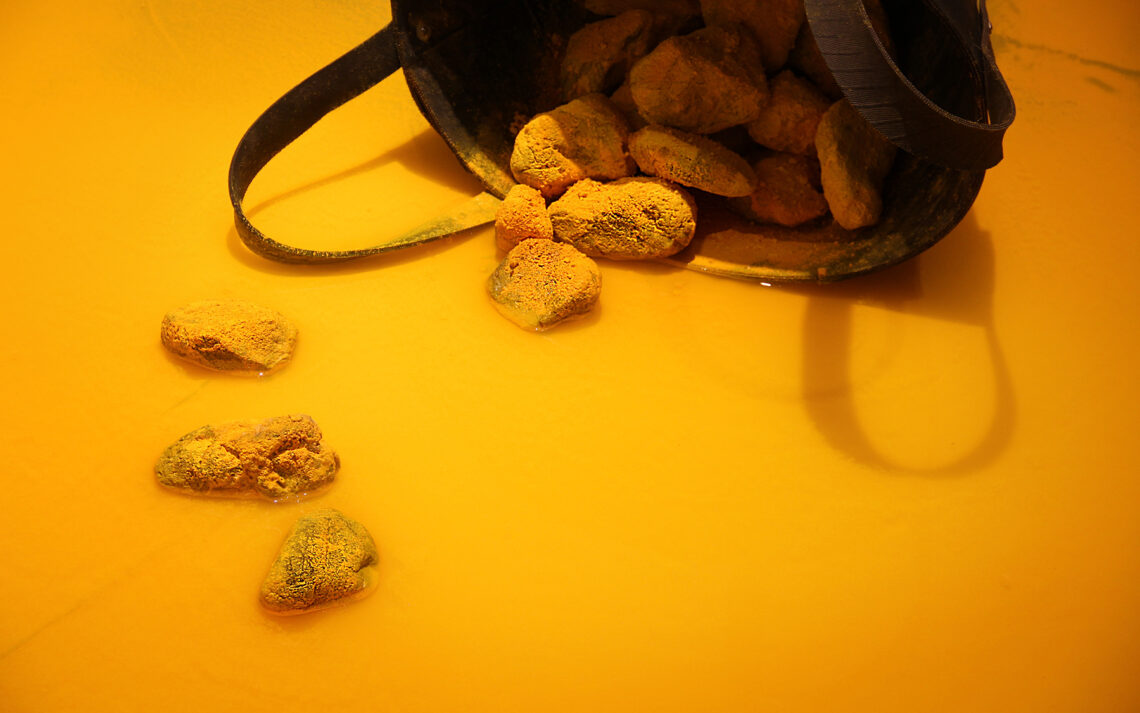 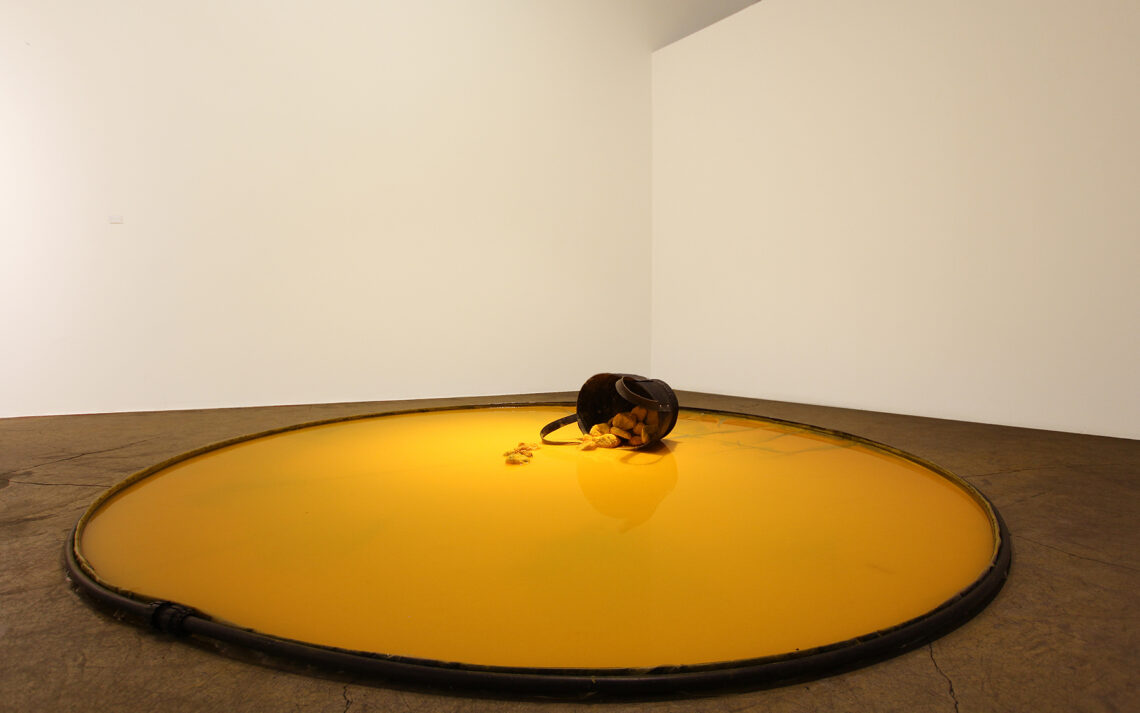